Lease a two-bedroom apartment in Miami, and you could be putting more than half your salary into the rent check. The same is true for Los Angeles and New York City ÂÂand it’s only getting worse, according to a report from real estate company Trulia.

Rents are rising most in the local housing markets where renters are already stretched thinnest. In the five least affordable markets, rents are now 7.8 percent higher than they were a year ago.Lease a two-bedroom apartment in Miami, and you could be putting more than half your salary into the rent check. The same is true for Los Angeles and New York City and it’s only getting worse, according to a report from real estate company Trulia.Demand is driving rents to record levels, but home prices are also rising. That leaves renters who want to buy homes in a tough spot, CNBC’s Diana Olick reports.Why renters remain in a housing Catch-22

“Rents are rising because of strong demand that supply hasn’t kept up with. Nearly all the new households are renters, and young people moving out of their parents’ homes will keep fueling rental demand,” said Jed Kolko, chief economist at Trulia.

Nationally, rents for units currently listed rose about 6 percent from a year ago, thanks to strong demand and still- limited supply. Median rents for those already occupying units rose a little over 3 percent.

While mortgage lenders generally suggest borrowers pay no more than about 30 percent of their wages on housing (mortgage interest, principal, taxes, insurance), renters in San Francisco, San Diego, Boston, Baltimore, Washington, D.C., and Chicago pay more than that for a two bedroom rental, according to Trulia. It begs the question, why don’t more renters buy?

“Both rents and [home] prices are outpacing income growth, so neither renting nor buying has become more within reach of what people can afford. Plus, paying more on rent makes it harder for would-be homebuyers to save for a down payment,” Kolko said. 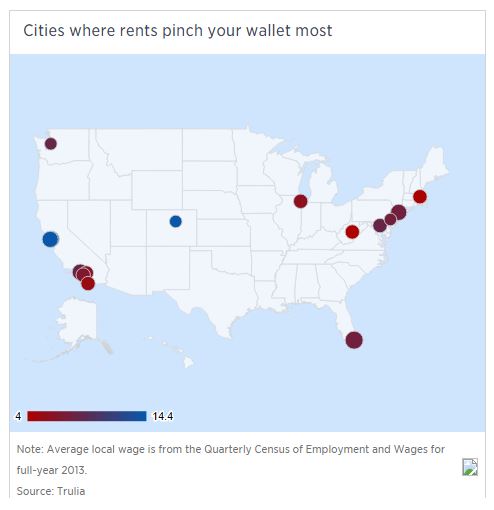 Rental demand is showing almost no sign of cooling off. Apartment vacancies did rise slightly in the third quarter for the first time in 4 1/2  years, according to Reis analytics firm, but that was largely due to more rental supply coming on line. More than 46,000 units were delivered during the quarter. This is the second-highest quarterly amount since the fourth quarter of 2002. Year to date, 113,024 units have been delivered.

“Units brought online during tight market environments have a tendency to actually push rents upward, not downward,” according to Ryan Severino, a senior economist at Reis. “So landlords should still be able to push asking rent increases on to their tenants.”

Analysts, however, do believe the market has reached an inflection point where vacancies have hit bottom and will slowly start to rise. That should help ease rents slightly into 2015.