Well, we can’t say we didn’t know this was coming. The rates have been at artificially low levels for years, and we know the saying “Nothing good lasts forever”.

This is the latest news from NAR:

Many economists believe mortgage rates will be on the move upward this year after sitting near historic lows the past few weeks. The 30-year fixed-rate mortgage rose above 4 percent for only two weeks since Oct. 16, according to Freddie Mac’s weekly mortgage market report. That has helped to lower borrowing costs for home buyers — but that may soon change.

The Federal Reserve is expected to boost its short-term interest rate target around the middle of the year if economic growth continues to move at a solid pace. 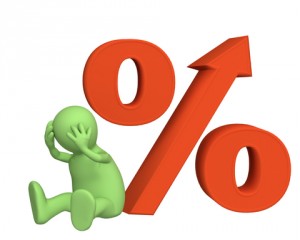 “Bond yields and mortgage rates will begin moving higher as the timetable for Fed interest rate hikes comes into focus, with rates on credit cards, auto loans, and home equity lines of credit responding after the fact,” says Greg McBride, Bankrate.com’s chief financial analyst. “The bulk of next year’s increases will come in the back half of the year.”

McBride is forecasting the 30-year fixed-rate mortgage to remain below 5 percent this year, but he says it could see lots of volatility.

“We’ll see rates near 4 percent on the low side if there’s an economic stumble or geopolitical crisis, and rates as high as 4.8 percent or 4.9 percent if the Fed missteps or misspeaks,” McBride says.

Lawrence Yun, chief economist for the National Association of REALTORS®, expects the Fed to act sooner with its uptick in rates due to inflationary pressures of rising wages and rents. Jonathan Smoke, chief economist at realtor.com®, is forecasting mortgage rates to reach 5 percent in 2015.