It is so good to be in a position that I feel good, both mentally and physically!! I know that is a weird way to start writing, but it is the reason I am writing this today.

Being self-employed, staying motivated and in a good mindset is imperative but also difficult. It has been drilled into my head over the course of the last 10 years or so that all things in life should be “Win-Win or No Deal”. When I started hearing that phrase, at first I could not really understand it, but then over time it became this drilled in line. It was actually a recited part of a slogan and written on walls!! Because somebody who I considered to be smarter than me wrote it and made it part of a mission statement, it had to be true….right???? So I marched in line like all the others and accepted it. But there was always this nagging little voice in the back of my head that was saying “Impossible”, “Not true”, “Against your fiduciary duties”. I ignored that little voice for quite some time, rather successfully and with full spirit, until that voice started to get louder.

How can things be Win-Win??? There are times and circumstances where win-win is the best result with the happiest people, I can agree with that and I can also see that as the strived for result. But Win-Win OR No Deal??????? That is not a goal that should even be strived for!!

Then comes this book I am reading, The Go-Giver by Bob Burg and John David Mann. As I am reading along I come to the paragraph in which “Sam – the Financial Advisor” says:

You know how people say ‘win-win’?

Joe nodded. “Always look for the solution where you both come out ahead.”

Sam nodded. “That’s right, and it sounds great —-in theory. But most of the time, what people call ‘win-win’ is really just a disguised way of keeping track. Making sure we all come out even, that nobody gets the advantage. Even-Steven. I scratched your back, so now you owe me.” He shook his head sadly. “When you base your relationships — in business or anywhere else in your life — on who owes who what, that’s not being a
friend. That’s being a creditor.”

It was like a electric shock went thru me!! The fog of win-win was removed and my nagging feeling that is was BAD in business was finally justified!!

Especially in the business I am in! I am a fiduciary, a representative of a very specific party in a transaction. I represent EITHER the buyer or the seller. How can I be doing my job properly, exercising COAL (Caring, Obedience, Accountability and Loyalty) while looking at things with the ‘Win-Win’ mindset????? I CAN’T!!! “Watch out for the other guy. Watch out for HIS interests. Watch HIS back. Forget about fifty-fifty, son. Fifty-fifty is a losing proposition. The only winning proposition is one hundred percent.”

On the same day as that cult-like brain washing was finally and completely removed, I came across a Bill Gates ‘meme’ on facebook. YES, facebook!! I am an admitted facebook addict that should probably seek out a support group (but until I do you can friend me at https://www.facebook.com/bobbiefiles) 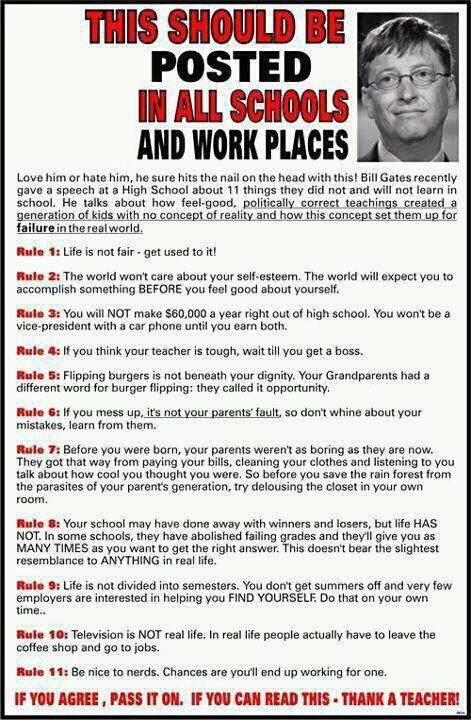 Now, I have to say that I did research this and it was never written or spoken by Bill Gates. I went to Snopes ( and you SOOOO know that if Snopes says it that IS the fact — said in Bobbie “snarky, evil laugh tone”). It was actually written by Charles J, Sykes in a book “50 Rules Kids Won’t Learn in School: Real-World Antidotes to Feel-Good Education”.

Nothing in it mentions ‘Win-Win’. It doesn’t mention it because it ain’t real world!!! Life isn’t fair so Suck It Up Buttercup!!

Win-Win is truly a bad way of business and a bad way to set up life. It creates a myth.  That we should be striving for even, for fair, for no winners-no losers.

In life there ARE winners, hey we got our Patriots!! There ARE losers, every other football team besides the Patriots!! There is being unfair, because anyone who knows me KNOWS I should have been born to look like Bo Derek!!